“When he sees her face on the screen, he gets so excited,” said Beckett’s mom, Alli when she talks about the speech therapy he gets by tele-therapy through Rainbows. “Beckett will pull out his toys and talk to Peggy. He likes to hold the phone and engages with Peggy by mimicking her sounds. He will carry the phone around when she is on. It’s like having her in his little hands.”

Josiah, Beckett’s dad, who is now home during the day, usually entertains 6-month old Baker so that Beckett gets the full attention of both his mom and Peggy.

Sometimes the family connects to Skype from their TV and Peggy is able to talk with Beckett and Alli on the big screen. “I appreciate that we can continue to do therapy even while we’re social distancing,” said Alli. “He continues to make progress by making more sounds and more approximations – a big word Peggy uses to describe the sounds that he makes that are almost like words.”

Alli notes that Beckett is much more verbal now at 21-months than when their pediatrician referred him to Rainbows at his 18-month checkup. She says she has learned a lot as well. “I’ve learned to be more engaging with my words and talk to Beckett all the time telling him what’s going on. Peggy gives us ideas for singing songs, and other resources that will help my son to progress,” said Alli.

Alli says the transition from speech therapy in their home to tele-therapy has been a nice alternative. “I’m happy that services were able to continue and Beckett will continue to make progress in his development. I appreciate that Peggy is available to answer my questions on how to handle the isolation as well. We would be disappointed if services would have been canceled due to COVID-19.” 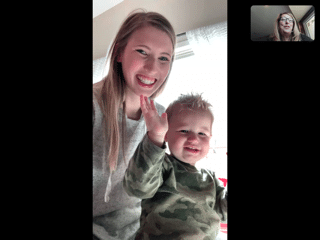