I was born to an unwed mother that spent a great deal of her young life being raped by her father. By the time she met my father she had spent a significant amount of time in a deep depression and had attempted suicide numerous times. My father began a life of petty crime at a very young age and at 15 graduated to murder when a fellow teen died during a gang fight. Almost ten years later he was indicted for a second murder that was also gang related. After a mistrial he moved to another state in an attempt to leave his old life behind and start over fresh. Not long after moving he met my mother in a bar. My father was 10 years older than she was, a schizophrenic alcoholic, and weekend drug user. With my mom’s depression and dad’s own issues it wasn’t long before their relationship fell apart. After 3 years and a second child my parents divorced. My little brother and I moved with mom to a different town several hundred miles away. After a while my mom got a stable job, enrolled in a local college, and we began seeing our dad on a somewhat regular basis.

When I was about 8 our mom began dating a guy at work and soon they were married. We began to see our dad less and less, and a year into the marriage my stepfather got a job in Kansas so we moved. My brother had never been as close to our father as I had so he clung to our step-dad, even taking his last name. I hated our stepdad and did everything I could to make it known- a feeling that he had no problem reciprocating. He and our mom went on to have 3 children of their own. I was angry all the time and began to get in trouble at school.

At age 11 I pulled a knife on a kid who was fighting with my brother. I was charged with aggravated assault but was never convicted. My mom got me enrolled in counseling and a therapist decided my behaviors were due to severe bipolar disorder. As a result I began taking medication. A year or so later a friend and I burned down a tree at our bus stop and I was placed on intensive probation. People from our church started taking me out for ice cream to try and talk to me about the choices I was making, but I wasn’t interested in anything they had to say. My mom contacted a chaplain from an organization called Youth for Christ named Bruce Stucky. He came to our house and spoke with me for several hours. He was in charge of a program that went into the juvenile facilities to minister to young people like me who had gotten into trouble. He warned me to straighten up or I would go there too. I didn’t listen to him either. I hated my life and blamed my parents’ divorce and mom’s remarriage for everything going wrong in my life. Shortly after that I was arrested for a series or burglaries in our neighborhood. I was incarcerated and convicted for 3 felonies and 5 misdemeanors.

After a few months of incarceration I was given a final chance. The Martin House was a home for boys run by a Christian organization, Youth Horizons. Their president, Earnest Alexander, believed in me with all of his heart and unofficially adopted me as one of his many sons. After several suspensions from school I was finally expelled for bringing a replica gun to school and putting it to another student’s head. The night before a court hearing I threatened to kill a Martin House staff member. I was forced to leave The Martin House and was again incarcerated.

I spent the next few years in correctional facilities and psychiatric hospitals, and at 15 was moved into the foster care system. I moved into the home of an elderly woman who was gone 3-4 days a week and provided little supervision. I had grown accustomed to abusing prescription drugs in the hospitals, and with their availability now gone I began smoking marijuana on a daily basis. I went on to try several harder drugs and at 17 my then-girlfriend introduced me to cocaine. I fell head over heels in love. I started out using a few times a week, but it wasn’t long before I was using around the clock every day. Things got very bad very fast between my foster mother and I, so I had to be moved. I came to live with a man named Arnold Downing, Sr. He was a very driven man with a genuinely good heart, and I learned a lot from him. I have always felt that if I had met him a little earlier in life things would have been significantly different. When I came to live with Arnold’s family I was already too far into my addiction. I quit for a few months but relapsed. I began using more than I ever had before, and my job did not provide enough money to support my habit. I began stealing from work and selling items from home. A few months after turning 18 I moved out on my own, and within just a few weeks I was laid off from my job. I began selling drugs full time, carrying a gun, and got so deep into my addiction to cocaine that I only ate a few times a week.

Things got worse and worse, and I was eventually kicked out of my apartment. Less than a month later I was stabbed when another addict attempted to rob me. Other dealers who I owed money were looking for me, and I again became homeless when I got into a fist fight with a friend I was staying with. I had burned so many bridges that I had no one else to turn to but my mother, who I had rarely seen in the past several years.

My mother picked me up from my apartment in Topeka and took me back to the home she shared with my stepdad I had left so many years before. After a few weeks I began the painful process of withdrawl. I had landed a remodeling job and spent a lot of the first few weeks sick. After a few months I began dating a girl I worked with and quickly moved in with her and her two children.

Around this time I reconnected with Earnest Alexander, my foster father so many years before. He took me out to lunch one day and introduced me to Donnovan Karber, a friend from church. Donnovan invited me to a men’s bible study group that he led and I began going on a weekly basis. In February of 2004 my girlfriend and I got married. In that next year my life began an incredible transformation. I began restoring the relationship with God that I had thrown away such a long time before, but things did not get easier. I struggled with having a good relationship with my wife and being the father that my two new children needed so badly. My wife struggled to have a healthy relationship with a man who had the past I did. After a few years we separated and she took the kids to live out of state.

Four months later my family returned and we tried to make things work, but the separation had caused even more damage. After numerous fights we sought the help of a family counselor through our church. Things began to get better and we finally began to grow. In the years that followed we had two more children. In 2011 I was able to reconnect with an old friend, Bruce Stucky; the Youth for Christ chaplain that had held church services in the jails when I was a kid. I began volunteering with YFC, and it was not long before I was offered a full time position on their ministry staff.

In the past year I have done a variety of things for Youth for Christ and have worked primarily as a program coordinator for the City Life Work Program, a job training ministry that provides employment and guidance to young people with pasts just like mine. Every day I am amazed at where God has guided me, and deeply grateful that He rescued me from the path I was on. 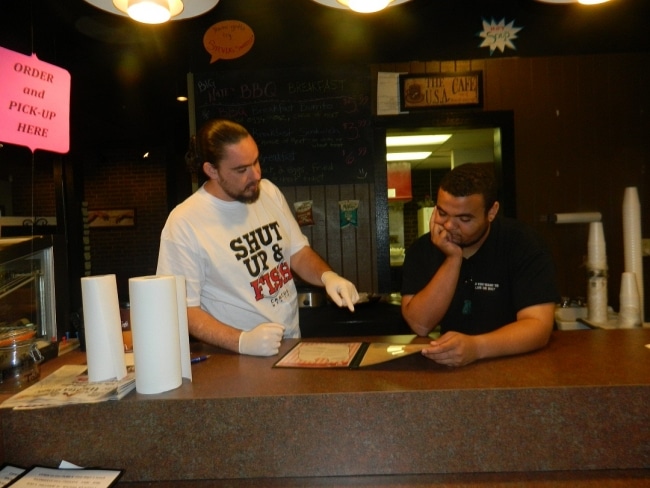